Discover some gems unearthed during research. Read a journal excerpt about my June 2016 pilgrimage to historic transatlantic slave trade ports.

Monuments, markers, museums, and exhibits about the legacy of African Americans continues to expand.

This September, the long awaited National Museum of African American History & Culture will open its doors. Earlier this year I learned of the Dred Scott statute erected by the efforts of a descendant. As East Coast Ivy League universities trip over themselves to publicly acknowledge the labor of enslaved Africans reverberating throughout their hallowed halls, a few endeavor to honor the grave sites of their builder’s bones. Closer to home and heart, my cousin Robin Hickman leads the ancestral call to establish a monument of our Great-Uncle Gordon Parks in downtown St. Paul, Minnesota.

Folks on the international scene continue to be equally attentive. 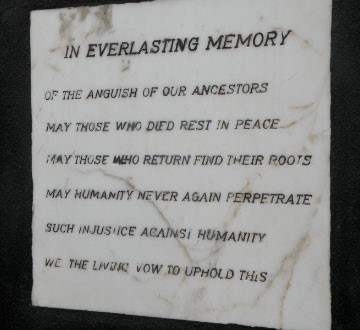 Plaque near the entrance to the courtyard of Elmina Castle, Elmina, Ghana. Erected before the 21rst century, it is one of many markers connecting today’s visitors to Ghana’s role in the transatlantic slave trade. Image from: http://slaveryandremembrance.org/articles/article/?id=A0142

Driving and walking along America’s east coast the edges of things take on a different meaning. Unlike the landlocked boundary edges of Midwest states, a region where I was born and raised, these Atlantic coastal zones are referenced by locals as low country or outer banks. Until now, these are terms I’d only read about. While local inhabitants speak these words with great familiarity I am learning how to use them without hesitation.

Planning this road trip, I was focused on routes and the fourteen state lines that extend to claim ownership of pieces of the Atlantic Ocean. But the coast is greater than artificial lines. It is a continuous and fluid maze.

Does land meet water or does water meet land? Water ebbs, roils, and slaps against land without cease. Erosion and global warming are the words we use for nanoparticles and molecules of essential elements and minerals that mingle with the intimacy of lovers.

If my ancestors had never trod upon these shores I would still be obsessed with this coastline. It was shaped eons ago by hot desires of molten lava churning from the celestial fireball at earth’s core. Explosions formed layers. Eventually the grind and uplift of umpteen cooled layers caused a crack that led to the shifting of a massive chunk of land—a continent that will one day be named Africa.

America’s east coast is separated by 4,200 miles of oceanic sprawl from West Africa’s hump, the drifted land mass it once clung to, like a suckling babe to a teat.

And similar to the motion of a babe’s mouth, pulling to drawdown milky flow from a delectable breast, all sorts of manmade debris are gravity-pulled to ocean depths. Ships, piers, ballast stones, someone’s sunken treasures.

But it is not manmade things at the ocean floor or the suspended mess of recent centuries leading me to these shores.

It is the place of ancestral footsteps and scattered bones of the 16th, 17th, 18th and 19th centuries that beckon my presence. On the only boat trip of this June pilgrimage my gaze toward land produced images of Africans stepping onshore, weary and traumatized from captivity in their homeland, the forced march to West African ports and being held for weeks prior to the two-month nightmarish transatlantic crossing.

Back on land my gaze toward wind skimmed waves energetically search for the place memory of African bones. Grey and white bones laying beneath murky sediments on the sea floor. Once found some are silent. Some move sluggishly, grudgingly. These bones know something. Maybe they know that their souls, gone all these eons, freely dive for visits on a whim. Or maybe the bones sing a song to their departed souls who skim and hover over the exact sea spot of their long ago fleshy descent.

It is not inconceivable to think that ancestor bones are still there. I confirm this with online searches. Salt water by itself will not dissolve bone. If bones are deep enough where there is little water movement or they become covered in silt and protected on the bottom of the ocean, they can last for thousands, sometimes millions of years in the right conditions.

Low country or outer banks. Coastal inhabitants have a relationship with their edges.

This incredible coastline bears witness to the largest forced migration of humans in world history.

That is why I sojourn here, tracing African ancestor’s footsteps with my own to better understand their connection to this interface of water and land.

Let the beauty you love be what you do. There are a hundred ways to kneel and kiss the earth. – rumi