So much is going on, these days, as we enter Black American History Month, February 2017. Americans awake and activate to a new reality. Our many disenfranchised and powerful voices, heavy with potential to unite, are also, as Jean Shinoda Bolen eloquently states, “…on the leading edge of transformational change anticipated by ancient, indigenous and astrological calendars. […helping to] bring what mothers universally want their children to everyone: a peaceful world, good food, air, and water, universal education, medical care, the chance to develop and grow physically, intellectually, and spiritually.”

Yes, we’re doing that work while individually, manifesting change through varied passionate and dynamic pursuits. (BTW… ‘we’ is anybody who is for inner and global peace [of mind] and justice whilst activated in the present moment for the highest good of all.)

With so many righteous voices and the ‘browning’ of America, Black Americans remain vigilant in remembering our history. What I’ve found to be true is that, since the latter part of the 20th century, more Black Americans are redefining/rewriting/expanding Black American history with greater clarity and truth, dispelling centuries of lies/half-truths and stingy acknowledgement of our incredibly layered past. Did you know:

Have you ever heard of:

Have you reframed you’re understanding/narrative of America’s past enslavement trade and centuries-long domestic terrorism, to something along the lines of:

•“In addition to the decimation, enslavement, and oppression of indigenous North Americans, the enforced labor and oppression of enslaved Africans, over two hundred and fifty years, helped build colonial ports and infrastructure (roads, buildings, wharves), allowed European settlers to build a thriving economy, fund the American Revolution, and establish America as a sovereign nation. From slave trade investments in ship building and slave procurement, to the exportation of tobacco, cotton, rice and textiles, and even, New England colony manufacturing of ‘Negro cloth’ purchased by deep South slave owners to clothe ‘their’ slaves, human oppression was deemed critical to America’s independence.”-Excerpt from Truth’s Place: A Pilgrimage to Historic U.S. Transatlantic Slave Trade Ports, Part I ©by Kim-Marie Walker (In-progress nonfiction)

As a descendent of America’s 450,000 ‘first Africans’, who arrived direct from West African or the Caribbean over 400 years, I pilgrimage to the place memories of their arrival, some 48-documented transatlantic slave trade ports, which dot the shorelines of America’s east coast and Gulf states (see MPCPMP image below, visit website). 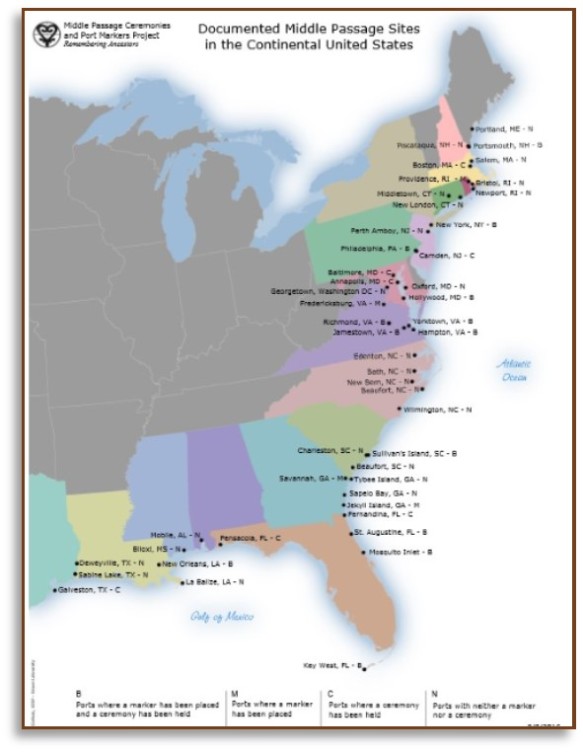 In 2016, I drove 2,000 miles to 18 ports along the coasts of Georgia, North and South Carolina, Virginia, Rhode Island, Connecticut, and New Hampshire. I continue the pilgrimage in 2017, anticipating that “…At the edges of things, I will learn to face the past with a brave heart and hopefully, receive healing for the centuries-old, genetic trauma still ghosting my bones.”

Tracing ancestor footsteps, from slave ship port to holding pen to slave marts and auction blocks I’ve met and discovered like-minded persons, authors, and organizations who continue to build upon and expose truths about our rich and complex African-American history upon these shores.

In celebration of Black History Month 2017, here are a few links to orgs/authors, encountered on my sojourn:

Daina Ramey Berry: Historian, Author , The Price for their Pound of Flesh: The Value of the Enslaved, from Womb to Grave, in the Building of a Nation (2017 new release!)

Mahmoud El-Kati, The Myth of Race, The Reality of Racism

Keith Stokes and Theresa Guzman Stokes, 1619 Heritage Group, A historical consulting firm dedicated to helping persons and institutions of color to increase their knowledge and access to the light of truth of their unique American heritage.

Tim Hashaw, The birth of Black America: The First African Americans and the Pursuit of Freedom at Jamestown

Have an educated and prosperous Black History Month! Ashe.